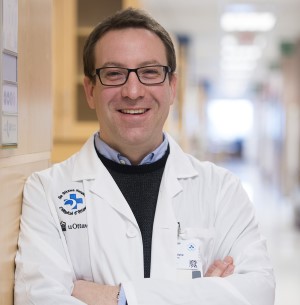 A Canadian collaboration led by Dr. Baptiste Lacoste has undertaken the first ever in-depth study of vasculature in the autistic brain. The product of four years of work, a paper published in the September issue of Nature Neuroscience lays out several lines of novel evidence that strongly implicate defects in endothelial cells—the lining of blood vessels—in autism.

Dr. Lacoste, a scientist at The Ottawa Hospital and an assistant professor in the University of Ottawa’s Faculty of Medicine and Brain and Mind Research institute, heads a lab that specializes in neurovascular interactions in health and disease. In collaboration with researchers at McGill University, Laval University, and the National Research Council of Canada, Dr. Lacoste’s team used a mouse model with one of the most common genetic mutations found in autism spectrum disorder—16p11.2 deletion, or “16p” for short.

Nerves and blood vessels not in sync

“If you imagine you have a luxury car—a Ferrari—and it’s beautiful, sitting in your garage. But if you don’t put gas in the tank, the car won’t drive,” says Dr. Lacoste. “It’s exactly the same with the brain. It’s the most complex organ, but if you don’t have blood supply, the brain just doesn’t work properly.”

Normally, when brain cells light up, blood rushes to the active brain region, a phenomenon called ‘neurovascular coupling’. But when neurons of mice with the 16p deletion are stimulated, this study found that vascular responses in those brain regions were delayed and weaker.

This disconnect—or ‘neurovascular uncoupling’—was shown to originate in the blood vessels themselves: Arteries isolated from these mice and kept alive in a medium also showed a weak and sluggish response to chemicals that induce dilation of blood vessels. The team further isolated the source of the deficit in the endothelium, as opposed to the other cell types, such as muscle cells, that surround blood vessels.

Dr. Lacoste’s work further shows that problems with blood vessels begin very early in life for those who carry the 16p deletion. In a petri dish, both human-derived and mouse endothelial cells with the mutation were unable to sprout the extensions that normally connect blood vessels to each other, allowing the vascular network to expand and grow. Endothelial cells in the brains of newborn autistic mice had the same problem.

By adolescence, the mice still showed reduced vascular density in their brains. Interestingly, in contrast to the problems in the circulatory system, the researchers found that the neurons in the brains of these young mice appeared to be surprisingly well organized.

As the mice grew, other cells in the brain compensated for their dysfunctional endothelial cells, so that by adulthood they had developed a full network of blood vessels. However, as the researchers’ previous experiments showed, these blood vessels remained dysfunctional in adult mice.

“It’s a bit like if a plumber comes to your house and does a bad job installing the pipes,” says Dr. Lacoste. “You will have trouble getting the right water pressure in your sink from then on.”

When a person or mouse carries a 16p mutation, that genetic difference is replicated in every cell in their body. This makes it harder to pin down the cause of systemic developmental differences.

To address this difficulty, Dr. Lacoste’s team generated mice that only expressed the mutation in their endothelial cells—so-called “conditional mutants”. These mice showed similar deficits in their vascular development as whole-body mutants.

Remarkably, although every other cell in their brain and body was genetically normal, these conditional mutants displayed some behavioural signs of autism: hyperactivity, stereotypic movements, and motor learning impairment.

This indicated that the problems in the blood vessels contributed to neuronal dysfunction, which in turn led to the outward signs and symptoms of autism.

The researchers used an equal number of male and female mice and found more pronounced effects in male mice, suggesting that females may have other tools, such as estrogen, that either compensate or mask the deficits. They suggest this as an avenue of inquiry, as well as the role of blood vessels in a broader range of neurodevelopmental disorders, which could lead to novel diagnostics and therapeutics.

The Ottawa Hospital is one of Canada’s top learning and research hospitals, where excellent care is inspired by research and driven by compassion. As the third-largest employer in Ottawa, our support staff, researchers, nurses, physicians, and volunteers never stop seeking solutions to the most complex health-care challenges. Our multi-campus hospital, affiliated with the University of Ottawa, attracts some of the most influential scientific minds from around the world. Backed by generous support from the community, we are committed to providing the world-class, compassionate care we would want for our loved ones.