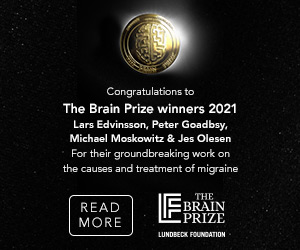 A group of four neuroscientists from Denmark, Sweden, UK, and USA who discovered a key mechanism that causes migraine that led to revolutionary new treatments receive The Brain Prize, the world’s most valuable prize in neuroscience.

Four decades of research paved the way for the development of entirely new classes of migraine-specific drugs which are now on the market and are already radically improving the lives of sufferers.

The Brain Prize will be awarded at a ceremony in Copenhagen on 25 October 2021, presided over by His Royal Highness, The Crown Prince of Denmark.

Four neuroscientists who, 40 years ago, discovered a biological mechanism that triggers a migraine attack that has led to powerful new treatments have been awarded The Brain Prize, the world’s most prestigious award for brain research.

Migraine is much more than a bad headache. It is a serious neurological disease with symptoms that include severe throbbing and recurring head pain, nausea, vomiting, dizziness, extreme sensitivity to sound, light, touch and smell.  Some migraine attacks can last for several days and more than four million people suffer at least 15 migraine attacks per month. For many, migraine severely diminishes the quality of life, including the ability to work, and can lead to depression, anxiety, and sleep disturbances. The economic and societal costs associated with migraine are extremely high – in the tens of billions of dollars worldwide.

Treatments for migraine have been available for some time, but they can have significant side effects and can only help to relieve the symptoms, not prevent migraine. There was, therefore, an urgent need to develop new classes of migraine-specific drugs.

Understanding a fundamental biological mechanism that triggers a migraine has led to the development of entirely new and effective classes of migraine treatments that received FDA approval in the United States in 2018. Patients have remarked that these drugs have “given them their life back”.

The story begins with Michael Moskowitz, an American and a professor of neurology at Harvard Medical School at the Massachusetts General Hospital. In 1979, he proposed that a migraine attack involves an interaction between the trigeminal nerve (which is involved in detecting sensations from the head and face) and the meninges and its associated blood vessels.  (The meninges are thin membranes that surround the brain and are the only structures inside the skull that sense pain.) Moskowitz showed in experimental models that a migraine attack is triggered when trigeminal nerve fibres release neuropeptides that lead to dilated (opened up) blood vessels of the meninges, inflammation and pain, sometimes in response to a signal from underlying brain. He was the first to propose that blocking the action of released neuropeptides could be a new approach to treating migraine.

Following the early discoveries of calcitonin gene-related peptide (CGRP) with a series of basic ground-breaking studies, Lars Edvinsson, professor of internal medicine at Lund University, Sweden, and Peter Goadsby, director of the NIHR-Wellcome Trust King’s clinical research facility at King’s College London, UK, and professor of neurology, University of California, Los Angeles, USA, teamed up and showed that the recently discovered neuropeptide, CGRP, was released from the trigeminal nerve during a migraine attack and that it was a particularly potent dilator of blood vessels in the meninges. Based on these findings Edvinsson and Goadsby proposed that CGRP may be of crucial importance in migraine and the key molecule in primary headache disorders.

Jes Olesen, clinical professor in the department of clinical neurology, Rigshospitalet, Denmark, then answered a crucial question: was CGRP release the cause or a consequence of a migraine attack? He showed that when given to migraine patients CGRP could trigger a migraine attack. He then went on to show that drugs which blocked CGRP – antagonists – could help treat migraine. Olesen’s work was not only crucial in showing a causal role for CGRP in triggering migraine, but it also demonstrated that CGRP could be an important new target for developing new treatments for migraine. The first CGRP antagonist drug effective in the acute treatment of migraine attacks were shown in a large trial involving Olesen and his team in 2004.

Edvinsson and Goadsby have, since the early discoveries, worked extensively together on migraine and cluster headache.  In the last decade, the idea of blocking the CGRP pathway took another direction leading directly to the development of new drugs called monoclonal antibodies (MAbs) for the prevention of migraine attacks.

“The Brain Prize is the most prestigious recognition there is with focus on brain/neuroscience. It rewards my successful work from basic research to proving the role of CGRP in headache disorders and the fruition of new medications for numerous migraine sufferers world-wide. Each day there is a mail from grateful patients – this warms my heart and I feel an enormous joy for the positive change of their lives they report.”

“It is an enormous privilege to receive the Brain Prize; really a prize for all the people who have suffered for so long with headache disorders, and for all the excellent scientists who have made an important contribution to this field.  It is an overdue recognition of the ‘Cinderella’ problem of migraine. Cinderella has arrived at the ball as a welcome guest – and got the glass slipper!  I feel privileged to work in medicine with patients’ headache disorders, and their families, to make some small differences and help the incredibly brave patients I see do just a little better.”

“When I heard the news, I was surprised and humbled.  The 2021 Brain Prize is very special. It comes with the recognition that years of research have paid off with new knowledge, new mechanisms and with that, new treatments for hundreds of millions of people.  I’m proud to have been part of this research from its beginning.”

“I have spent my entire professional life trying to get migraine accepted as a neurological disease. Therefore, it is with great joy that I receive the world’s top Brain Prize. It helps to increase awareness of migraine as a widespread and important disease. Even in the international research community, the field has been neglected and misunderstood. I hope the ongoing focus on migraine and other headache disorders will have an even greater impact, leading to new discoveries, research and development of therapies for the benefit of those affected.”

The development of CGRP antagonist drugs has opened a new era in migraine research and therapy. Although they do not cure migraine, they markedly improve the quality of life of many migraineurs. They are also the first drugs to have a duality of mechanism, being active in both the acute treatment and the prevention of attacks, and they have paved the way for the study of other potential targets.

The Brain Prize is the world’s largest prize for brain research and is awarded each year by the Lundbeck Foundation, one of the largest commercial foundations in Denmark. The award is worth 10 million DKK (approx. €1.3 million) and is given to one or more neuroscientists who have had a ground-breaking impact in the field.

Professor Richard Morris, chair of the prize’s selection committee, explains the reasoning behind the award:

“Migraine is one of the most common and disabling neurological conditions affecting humans. The work of the four recipients contributed to the clinically effective classification of the various types of this disorder, and then to unravelling the key mechanisms that cause it. This understanding led to the development of a novel therapy and has opened windows into future ones. Their work on migraine is a remarkable example of bedside-to-bench-to-bedside research that has yielded tangible clinical benefit.”

Martin Meyer, Director of The Brain Prize at the Lundbeck Foundation,

About this year’s prize winners

Lars Edvinsson is Swedish and a Professor of Internal Medicine at Lund University, Sweden. He is also President of the International Headache Society and Professor in Clinical Pharmacology at Copenhagen University. He trained at Lund University Medical Faculty and graduated as MD with PhD in 1980. He became a full professor at Lund University and senior consultant at the University Hospital in Lund in 2002. He is also the founder of the Glostrup Research Institute and has been its leader for the last 15 years. He is a leading expert in the field of cerebral circulation and migraine.

Peter Goadsby is Australian/British. He is Director of the NIHR-Wellcome Trust King’s Clinical Research Facility at King’s College London in the United Kingdom and is Professor of Neurology at the University of California, Los Angeles, USA. He is also Honorary Consultant Neurologist at King’s College Hospital and the Hospital for Sick Children, Great Ormond St, London. He obtained his medical degree at the University of New South Wales (UNSW), Australia. After post-doctoral work in New York, Paris, and post-graduate neurology training in London he returned to UNSW, and the Prince of Wales Hospital, Sydney as a consultant neurologist and became an Associate Professor of Neurology.

Michael Moskowitz is American and a Professor of Neurology at Harvard Medical School at the Massachusetts General Hospital, USA.  Professor Moskowitz received his undergraduate and medical degrees from Johns Hopkins University and Tufts University School of Medicine.  After becoming certified by the American Boards in both internal medicine and neurology, he did a post-doctoral fellowship at the Massachusetts Institute of Technology and remained on its faculty for 6 years in full time research.  His research focuses on translational mechanisms underlying migraine and stroke and is credited with foundational discoveries that ushered in modern day migraine therapeutics.

Jes Olesen is Danish and is a Professor of Neurology in the Department of Clinical Neurology, at the University of Copenhagen, Rigshospitalet, Denmark. He studied at the University of Copenhagen. His neurological education included a residency at Cornell Medical School, New York, and a volunteer period at the National Hospital Queen Square, London, UK. He is the father of the International Headache Classification and has identified several signaling mechanisms in migraine leading to new drug targets and registered drugs. He founded and for many years led the Danish Headache Center where he is still an attending physician.

Full biographies and autobiographies are in the accompanying information pack/, available on request.

About The Brain Prize

The Brain Prize is the world’s largest prize for brain research and is awarded each year by the Lundbeck Foundation. The award is worth 10 million DKK (approx. €1.3 million) and is given to one or more neuroscientists who have had a ground-breaking impact in the field.

The Brain Prize is awarded at a ceremony in Copenhagen, presided over by His Royal Highness, The Crown Prince of Denmark. This year it will take place on 25 October.

The Brain Prize recognises highly original and influential advances in any area of brain research, from basic neuroscience to applied clinical research. Winners may be of any nationality and work in any country around the globe. The Brain Prize was first awarded in 2011 and has so far honoured 34 scientists from 9 different countries.

The Prize and associated activities are a celebration of outstanding achievements in neuroscience and are at the forefront of the Lundbeck Foundation’s ambitions to make Denmark a world leading neuroscience nation.

Press release by the Lundbeck Foundation