Compiled by the Canadian Association for Neuroscience from data available on the CIHR website.

Project grants granted by the Canadian Institutes of Health Research are the core funding mechanism for biomedical research in Canada.  Unfortunately, success rates in recent competition have been dwindling (Figure 1).  The success rates for funding applications at CIHR has steadily declined since 2005, from a 31% success rate to a success rate below 15% in 2018 (less than one in six successful applications). Current success rate levels are too low to maintain a diverse and flourishing research environment, as many excellent research programs go unfunded due to lack of available funds. Success rates under 20% means that researchers spend countless hours writing grant applications, while their chance of being successful are too low to be sustainable. In addition, it should be noted that the current funding level is only achieved by making drastic cuts to the budgets of all project grants (often >25%), which further highlights the lack of sufficient funding for this competition. 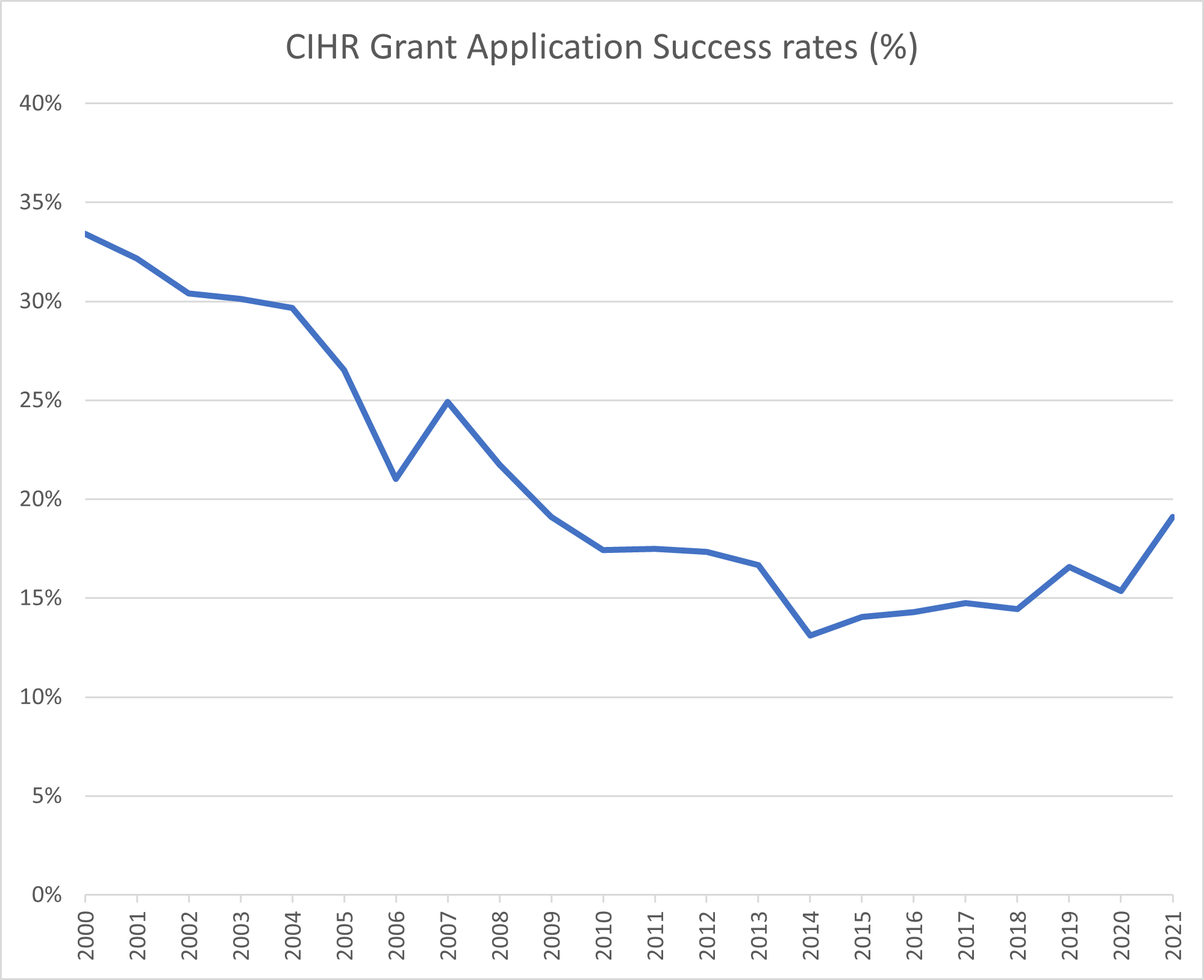 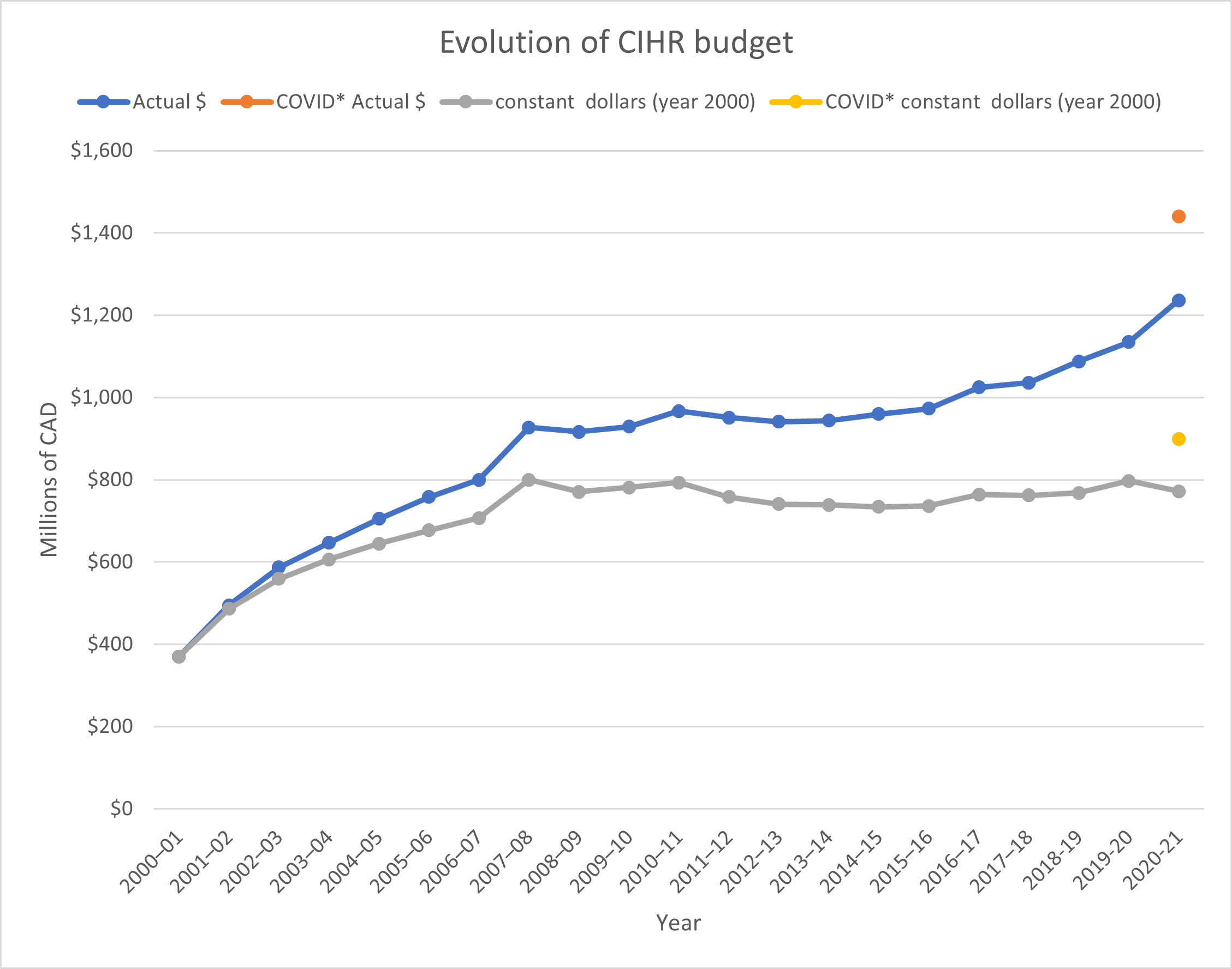 Year 2020-2021 included Statutory Authorities $203.6M time-limited funding for COVID-19 research (Pursuant to the Public Health Events of National Concern Payments Act). As this funding is a one-time addition to the CIHR budget not dedicated to the regular programs, it is indicated as extra data points (in yellow and orange in the graph)

Comparison with the NIH budget

The NIH’s 2020-2021 budget was $41.5 billion USD (approx. $55.7 billion CAD), compared to CIHR’s $1.44 billion CAD (which includes one-time investments in COVID-19 research). This represents a 39-fold difference in funding support for CIHR, which contrasts with the nine-fold difference in population between the United States and Canada. 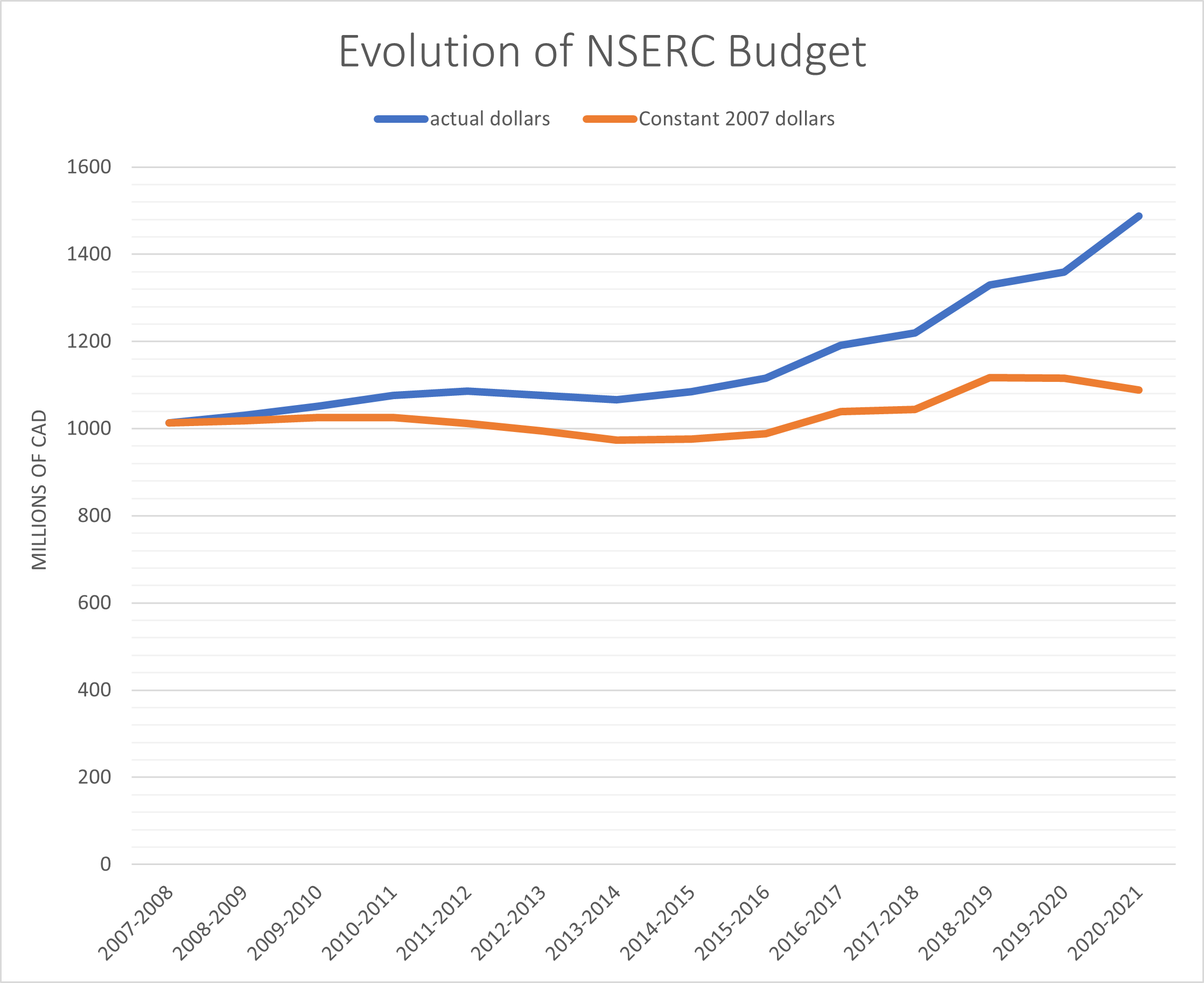 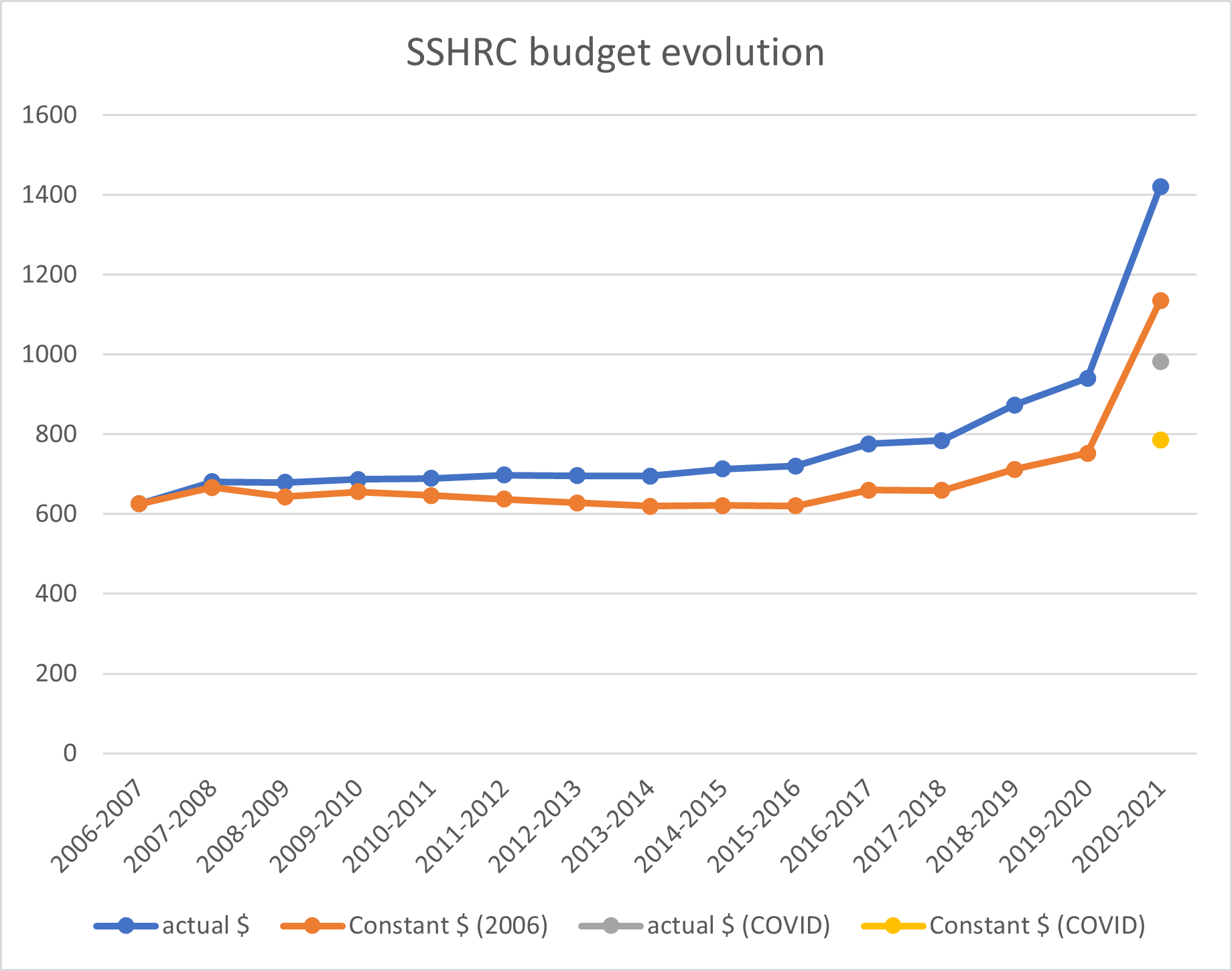 More support is required to maintain Canada’s attractiveness for the next generation of researchers. Trainees that successfully compete for Canada Graduate Scholarships (Master’s program; CGS-M), receive an $17.5K CAD per year award, an amount that has not kept up with inflation and is stagnant since 2003. This is below the low-income level cut-off of $22k CAD for a person living alone in a major Canadian city. The NSERC website states that “This support allows these scholars to fully concentrate on their studies in their chosen fields”. This is no longer accurate, and disheartening for students, who must now face rising housing costs and inflation rates. Academia is viewed as an uphill battle, with no clear indication that the situation will improve, which is a daunting prospect for trainees.

Paying students a living wage is the base for equity, diversity and inclusion, and absolutely required if we are to attract the brightest minds from diverse backgrounds and not only those who are independently wealthy.

The Advisory Panel on Federal Support for Fundamental Science was appointed in June 2016. Their mandate entailed a review of the federal system of supports for research conducted by scientists and scholars employed outside of federal, provincial, or territorial government departments and agencies. The Fundamental Science Review, also known as the Naylor Report, made important recommendations to improve the Canadian Research Ecosystem.

The Panel’s single most important recommendation (R6.1) is that the federal government should rapidly increase its investment in independent investigator-led research to redress the imbalance caused by differential investments favouring priority-driven targeted research over the past decade.  (Investing in Canada’s future – Strengthening the Foundations of Canadian Research: Canada’s fundamental Science Review, page xviii http://www.sciencereview.ca/eic/site/059.nsf/vwapj/ScienceReview_April2017-rv.pdf/$file/ScienceReview_April2017-rv.pdf) 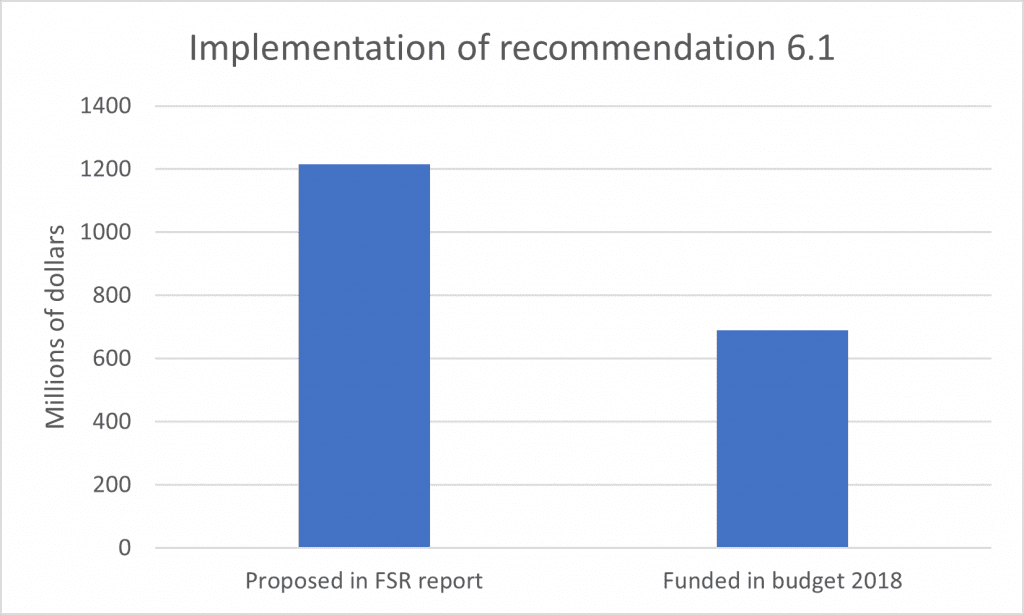 The Fundamental science review report proposed investments in Investigator-led direct project funding over 4 years of $1215 Millions, while $689 Millions were included in the same four year period in budget 2018, or 56.7%.

The Organisation for Economic Co-operation and Development (OECD) is an international organisation that works to build better policies for better lives. The OECD collects data and publishes statistics on a wide range of range of social, economic and environmental challenges.
Here we present a collection of graphics on science performance, science funding and the number of researchers in Canada. Canada is compared to the other countries of the G7.

The following figure shows that Canada is the only country in the G7 in which Gross domestic spending on R&D has been going down since 2001.

Canada is now second to last in the G7 in this metric.

Canada’s youth hits high scores in science – Scientific performance, for PISA, measures the scientific literacy of a 15 year-old in the use of scientific knowledge to identify questions, acquire new knowledge, explain scientific phenomena, and draw evidence-based conclusions about science-related issues. The mean score is the measure.
Both boys and girls score high in this measure in Canada.

Research-driven innovation is one of the pillars of today’s knowledge-based economy. The Canadian Association for Neuroscience is committed to advocating for increases in the total budget of the three main granting councils of Canada, CIHR, NSERC and SSHRC.

CAN holds its first in-person Hill Day in Ottawa November 3, 2022

The Canadian Association for Neuroscience held its first in-person Parliament Hill Day on November 3, 2022 in Ottawa. It was an opportunity for our team of neuroadvocates to meet face to face or virtually with members of Parliament, Senators, Parliamentary staff members and important senior civil servants to advocate for a increased support for CIHR, NSERC and SSHRC, graduate scholarships and postdoctoral fellowships, and to make research on Brain and Mental Health a national priority. END_OF_DOCUMENT_TOKEN_TO_BE_REPLACED

The CAN advocacy team is happy to share our submission to pre-budget consultations in advance of the 2023 budget of the House of Commons permanent committee on Finances (FINA)
View our submission: Increased investment in scientific research for the health and prosperity of Canadians today and tomorrow
The deadline to submit a brief is Saturday, 8 October 2022 at 11:59 p.m. Eastern Standard Time – View the news release here

View the results of our advocacy survey here
https://can-acn.org/can-2022-advocacy-survey/

On June 6, the new House of Commons Standing Committee on Science and Research tabled its first ever report, as part of its study on “Successes, Challenges and Opportunities for Science in Canada”. The Canadian Association for Neuroscience (CAN) was one of sixteen organizations that submitted a written submission as part of the consultations. The Committee held meetings over the course of three months, which CAN closely followed, hearing from science and research organizations, post-secondary institutions, companies and government departments.

CAN welcomes all 13 of the recommendations made to government, and is pleased that one of our recommendations (An initial 25% boost to the budgets of the three granting councils followed by a 10% yearly increase) was specifically referenced in the report. Additionally, we are happy to see that the Committee has recognized the tremendous setback to Canada’s research ecosystem caused by the pandemic, and the impact of the rapid mobilization of resources to conduct COVID-19 research, sometimes at the expense of research on other health issues. END_OF_DOCUMENT_TOKEN_TO_BE_REPLACED

Advocacy training at CAN2022

END_OF_DOCUMENT_TOKEN_TO_BE_REPLACED

On Monday, April 25, the Canadian Society for Molecular Biosciences and the Canadian Association for Neuroscience welcomed the Honourable Senator Stan Kutcher for a session on science policy and advice.

END_OF_DOCUMENT_TOKEN_TO_BE_REPLACED

The Canadian Association for Neuroscience recognizes key investments that were made to support targeted research areas in budget 2022 but calls on the government to provide broader support to the Canadian scientific community through increased funding for fundamental research. We are specifically disappointed with the lack of increased support for non-targeted, hypothesis-driven & investigator-led research funded through Tri-Agency – Canadian Institutes of Health Research – CIHR, Natural Science and Engineering Research Council – NSERC, and Social Sciences and Humanities Research Council -SSHRC). END_OF_DOCUMENT_TOKEN_TO_BE_REPLACED

Canadian neuroadvocates are meeting with members of Parliament, Senators and Parliamentary staff this week for CAN Parliament Hill Week!

We are advocating for increased funding for basic research in Canada, provided through CIHR, NSERC and SSHRC. Our specific asks are:

Recommendation 1: That the government of Canada provide a one-time 25% increase in investment in the Canadian Institutes of Health Research (CIHR), the Natural Sciences and Engineering Research Council (NSERC) and the Social Sciences and Humanities Research Council (SSHRC) for research restart and recovery from the setback of the COVID-19 pandemic to research laboratories in Canada.

Recommendation 2: The government should commit to providing robust and predictable funding for basic discovery research to sustain and grow Canada’s scientific community. Funding to the Canadian Institutes of Health Research (CIHR), the Natural Sciences and Engineering Research Council (NSERC) and the Social Sciences and Humanities Research Council (SSHRC) should be increased by at least 10% yearly. This recommendation is in accordance with the 2017 Fundamental Science Review and will ensure Canada’s research ecosystem is healthy and resilient to face any future challenge.

Read more in our

Read CAN’s submission to the House of Commons Standing Committee on Science and Research, for the Study titled: SUCCESSES, CHALLENGES AND OPPORTUNITIES FOR SCIENCE IN CANADA

Published on the House of Commons website on March 14, 2022

Read our submission to the pre-budget consultations

We have made the following recommendations to the government in the pre-budget consultations in advance of the 2022 Federal budget:

Recommendation 1: That the government of Canada provide a one-time 25% increase in investment in the Canadian Institutes of Health Research (CIHR), the Natural Sciences and Engineering Research Council (NSERC) and the Social Sciences and Humanities Research Council (SSHRC) for research restart and recovery from the setback of the COVID-19 pandemic to research laboratories in Canada.

Recommendation 2: The government should commit to providing robust and predictable funding for basic discovery research to sustain and grow Canada’s scientific community. Funding to the Canadian Institutes of Health Research (CIHR), the Natural Sciences and Engineering Research Council (NSERC) and the Social Sciences and Humanities Research Council (SSHRC) should be increased by at least 10% yearly. This recommendation is in accordance with the 2017 Fundamental Science Review and will ensure Canada’s research ecosystem is healthy and resilient to face any future challenge.

You can read our full submission here

The CAN Advocacy Committee

CAN and SfN organized an advocacy training workshop on May 22, 2019, in Toronto