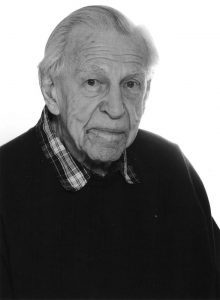 Dr. Peter Milner was an outstanding neuroscientist who, with the late James Olds, discovered that electrical stimulation in specific parts of the brain (sometimes referred to as ‘pleasure centers’) acted as a reward for behavioural actions. This demonstration generated enormous interest in the neuroscience community and was the basis of significant research on the neurobiology of learning and memory and the basis for much research leading to better understanding of the neural basis of drug addiction. Peter was a British engineer, who worked on the development of radar and nuclear energy during World War II and, in the fall of 1944, came to Canada to work on atomic energy. He became fascinated by the study of the brain after he was exposed to the theoretical ideas of the famous Canadian psychologist Donald Hebb at McGill. He became a graduate student under the supervision of Hebb and, in 1956, he was appointed as Assistant Professor in the Department of Psychology at McGill where he stayed for his entire distinguished academic career.

In 1970, he published a textbook called “Physiological Psychology” based on his lecture notes and, soon, this textbook dominated the field and helped define the study of the neural basis of behaviour, a field often referred to as Behavioural Neuroscience. For many years, it remained the influential textbook of the field and was translated into several languages. In 1999, he published ‘The Autonomous Brain’ a monograph that presented a novel view of how behavior is generated by the brain’s spontaneous activity guided by input from internal and external inputs. Milner also trained numerous graduate students who made their own contributions to the field. Milner received the Gold Medal for Distinguished Lifetime Contributions to Canadian Psychology from the Canadian Psychological Society.

SfN’s The history of neuroscience in autobiography – Peter M. Milner