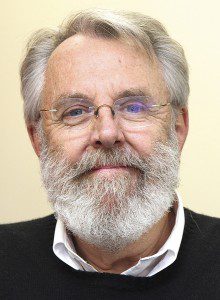 Dr. Goodale’s research is aimed at understanding the functional organization of visual pathways in the human brain. To do this, he studies visual discrimination and the visual control of skilled movements in neurological patients with damage to different visual areas in the brain. He also uses functional magnetic resonance imaging (fMRI) to look at activity in the healthy human brain as it performs different kinds of visual tasks.

Dr. Goodale’s early work, in which he demonstrated that the visual control of action is functionally independent of conscious visual perception, laid the foundation for the Goodale-Milner ‘duplex’ account of high-level vision. This account provides a convincing resolution to conflicting accounts of visual function that have characterized much of the work in the field for the last one hundred years.

Over the last decade, he has led much of the neuroimaging and psychophysical research that has refined and extended the two-visual-systems proposal. These ideas have had an enormous influence in the life sciences and medicine, and the two-visual-systems proposal is now part of almost every textbook in vision, cognitive neuroscience, and psychology.

His latest research interest is on echolocation in humans and his data show that echolocation can be used in a way that seems uncannily similar to vision.

Visit his website for more information about his current research interests, his team, his biography and recent publications: Goodale laboratory website