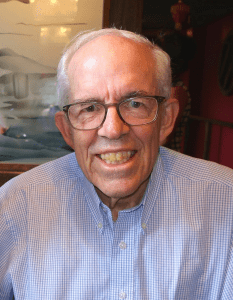 Dr. Richard (Dick) B. Stein died on November 3, 2020 and is remembered by friends, family and colleagues as a genuinely decent man who treated everyone with respect, fairness and kindness. Many reflections on the achievements of a scientist of Dick’s caliber might begin differently, but these personal qualities and his integrity were also at the core of his contributions to neuroscience; our community was enriched by his acumen and “do as I do ” style of mentoring.

Dick was born in 1940, the middle son of Nathalie and Samuel Stein who both died when Dick was just sixteen. Given these circumstances, his undergraduate (MIT, Physics, 1962) and graduate (Oxford University, M.A., D.Phil., 1966) education was made possible thanks to scholarships. In grateful recognition, Dick and his family established a graduate bursary in Neuroscience at the University of Alberta (http://uabgive.ca/RStein). His career as a faculty member began at the University of Alberta in 1968 and continued until his retirement in 2018. In those fifty years, he and his wife Sue raised their children, Ellie and Eric, and he co-founded another offspring, the Division of Neuroscience that matured into today’s Neuroscience and Mental Health Institute (NMHI). Today the NMHI is home to over 150 scientists and clinicians, and is a mélange of basic and applied areas of neuroscience, rehabilitation and mental health in keeping with Dick’s eclectic academic output.

During his Sarrazin lecture in 2001, Dick remarked that his career did not follow a linear path: “…my path has been more of a random walk.” The walk began with theoretical approaches expected of physicists and nurtured by people like Walter Rosenblith (MIT) who introduced Dick to Shannon’s “A mathematical theory of communication”. This early interest culminated in some of Dick’s most highly cited papers on modeling and neuronal variability published in Biophysical Journal in the mid 1960’s. The next random step was prompted by Dick’s awareness that his theories may have little to do with the physiology of excitable tissue and he sought out mentors to help fill that gap: Dennis Noble and Peter Mathews (Oxford). The physicist had now come to embrace experimental physiology of the sensory and neuromuscular systems and cultivated both of these approaches when he formed his own lab in Edmonton. Over the next few decades the University of Alberta grew to be recognized as one of the leading international centres for sensorimotor systems neuroscience. Dick together with his 60+ students, fellows and visiting scientists made important basic science discoveries about how muscles generate force, how reflexes are adapted to behavioural context and how neurons encode information about the sensed world. These discoveries were made possible in part by the multidisciplinary environment Dick created as he welcomed thinkers from a wide range of backgrounds: mathematics and physical sciences, engineering, physiology, rehabilitation and physicians. This included some key members of his lab that had the vision and skills to join Dick’s random walk into the field of prosthetics and assistive devices. For example, Dean Charles in the 1980’s whose neural interfaces and electronics were used to restore function in people who had lost an arm or hand, providing the opportunity for a professional saxophonist to play again. ​Kelly James, a mechanical engineer who invented a knee-prosthesis, and along with Robert Rolf developed it into the C-Leg that was sold to Otto Bock in 1992, and remains the most advanced intelligent-knee on the market. Robert Rolf also developed hardware and software for the WalkAide, a device that improves walking for people with a condition called foot drop, and was licensed to the Hanger Orthopedic Group in 2004 and is now sold worldwide. Dick encouraged people to listen, recognize good ideas — impartial of the source, and have the courage to apply their expertise to practical problems. He was always the steady glue that held everyone together and treated everyone the same.

From physicist, to physiologist, to prosthetics and in these most recent years Parkinson’s; Dick loved alliteration. This final segment of Dick’s “random walk” had a festinating quality characteristic of neurologic conditions that affect the basal ganglia. His days that had typically started with walking, jogging, or cycling to work, and nordic skiing in winter, were modified as movement impairment and non-motor symptoms progressed. For the past two years, Dick was a resident of the Edmonton General Continuing Care Centre where staff, family and friends supported his continued determination to walk, carefully recording distances and times for analysis. Perhaps the culmination of his joy for movement was a dance with Sue, his ballroom partner for 57 years, during a performance entertaining residents and friends at the care centre: https://www.thevitalbeat.ca/news/couples-dance-performance-captures-lifetime-love/

Dick would conclude that in a random walk, the expected distance from the starting point, or root-mean squared distance, should be close to the square root of the number of steps taken, and proceed to verify the accuracy of the theoretical prediction. Those of us who had the opportunity to take a few random steps with Dick during his formidable scientific career, have come away richer intellectually and personally. Dick is one of the most remarkable men that any of us has ever come to know. He has fought a valiant fight with courage, dignity and an unabiding love for his family, all of which epitomize his entire life.

Text written by colleagues of Dr. Stein at University of Alberta