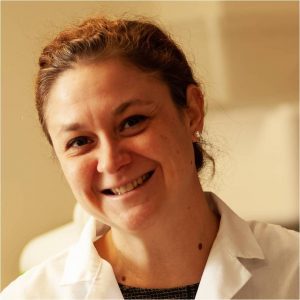 Funding:
This work was funded by the Canadian Institutes of Health Research and the Packard Center for ALS Research at Johns Hopkins university.

Amyotrophic lateral sclerosis (ALS) is a fatal neurodegenerative disease characterized by the loss of motor neurons. The disease gradually causes paralysis – over time as the motor neurons die, patients lose the ability to walk, talk, eat, swallow and, eventually, breathe. For 80 per cent of patients, death occurs within 2 to 5 years of diagnosis. There is no cure for ALS, and few treatment options.

In more than 90 per cent of ALS cases, a phenomenon called TDP-43 proteinopathy occurs. This is characterized by an accumulation of a protein called TDP-43 in cells, leading to an inflammatory and toxic reaction causing neuron injury.

An important publication by the post-doctoral researcher Dr. Silvia Pozzi, working in Dr. Jean-Pierre Julien’s laboratory at the CERVO Brain Research Centre, showed that TDP-43 proteinopathy can be prevented using a custom designed antibody. More importantly, the group showed that the antibody could reduce TDP-43 pathology and improve motor and cognitive deficits in mouse models of ALS disease.

To obtain these results, the team of researchers generated new antibodies specifically directed against a region of TDP-43 implicated both in protein aggregation and in the activation of inflammatory and toxic reactions.

Two and four months after treatment with the antibody in mouse brains, the animals performed significantly better at the novel object recognition test for memory tasks and showed less anxiety than those treated with a control antibody or with saline. Moreover, mice treated with the antibody at the spinal cord level showed improved muscle strength.

The type of antibodies developed and used in this study, called single-chain antibodies, are a new tool in nanomedicine. This study demonstrates for the first time that a single-chain antibody against a specific portion of TDP-43 is an efficient therapeutic approach to target TDP-43 proteinopathy and ameliorate cognitive and motor deficits in transgenic mouse models of ALS.

This study offers new hope for ALS patients, by showing immunotherapy against TDP-43 to be a promising new treatment avenue.

TDP-43 proteinopathy is also observed in 50 per cent of cases of Frontotemporal dementia and in other neurodegenerative disorders such as Alzheimer’s, Parkinson’s and Huntington’s disease, suggesting that this discovery could also have an important impact in these pathologies.

This work was done by Dr. Silvia Pozzi while she was a post-doctoral fellow in the laboratory of Dr. Jean-Pierre Julien at the CERVO Brain Research Institute, affiliated to Université Laval in Quebec City. During her post-doctoral period, Dr. Pozzi combined her theoretical and technical background on ALS, obtained during her PhD, to new approaches and techniques in order to tackle the scientific problem and find the best experimental strategy to prove her hypotheses, dig into the mechanisms of action of the approach and publish in a high ranking journal.