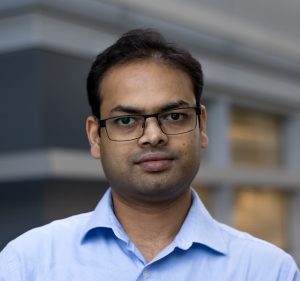 How much neurons are activated, or excited, is of paramount importance as it influences brain activity and behaviors. The level of activation is regulated by both excitatory and inhibitory signal mechanisms. Defects in the control of neuron excitability lead to brain disorders such as epilepsy (too much excitation) and other neurodevelopmental and neurodegenerative diseases.

One of the largest inhibitory responses in the brain is called a slow afterhyperpolarization (sAHP). A sAHP can last for 5 to 10 seconds, exerting its influence over the excitability of a class of neurons called hippocampal pyramidal cells. While the importance of the sAHP has been recognized for over 30 years, a publication by Dr. Giriraj Sahu, in the Laboratory of Dr. Ray Turner at University of Calgary, is the first to identify a complex of three proteins with a crucial role in generating the sAHP. In order to identify this complex, Dr. Sahu used cutting edge techniques like super-resolution direct Stochastic Optical Resolution microscopy (dSTORM), brain slice electrophysiology, and protein-protein interaction studies using Fluorescence Resonance Energy Transfer (FRET).

These findings will have a great impact as the magnitude of the sAHP has been linked to changes in excitability during aging, epilepsy and neurodegenerative disease conditions. For example, there is a decrease of sAHP and an increase of firing frequency found in the case of epileptic neurons and alternatively, an increase in sAHP and reduction of neuronal firing is reported in aged animals. Thus, identifying the channels and the mechanisms that contribute to the sAHP now provides a therapeutic target to potentially treat aging and epileptic-related deficits by targeting the activity of the proteins that form this important protein complex.

Dr. Giriraj Sahu performed this work as a post-doctoral fellow in the laboratory of Ray Turner at the University of Calgary. He performed almost all of the experiments conducted in this study using a Snyder Institute Live Cell Imaging facility directed by P. Colarrusso, and contributed to the analysis and design of the experiments along with writing the manuscript with Dr. Ray Turner. Dr. Sahu used many cutting-edge microscopic techniques in this study, and in doing so developed an expertise that allowed training of many doctoral and master student’s not only from the Turner Lab but also students from other labs of the University of Calgary.