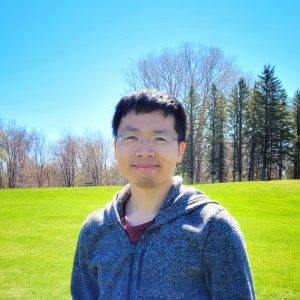 Autism spectrum disorder (ASD) is composed of a set of neurodevelopmental syndromes estimated to affect approximately 1 in every 59 children. While core symptoms such as impaired social interactions, disrupted communication and stereotyped behaviors have been well characterized, motor skill dysfunction has also been reported in patients with ASD, as children with ASD often exhibit delays in achieving motor developmental milestones such as crawling, walking and speech articulation. However, little is known about the neural mechanisms underlying motor-related deficits in ASD. In this study, Dr. Xuming Yin, a post-doctoral fellow in Dr. Simon Chen’s Lab at the University of Ottawa, discovered that mice with the chromosome 16p11.2 deletion, a strong genetic risk factor in developing ASD, also display a delay in motor learning without showing gross motor deficits. He combined a system-to-circuit approach with in vivo two-photon imaging and demonstrated that excitatory neurons in the motor cortex showed abnormally high and synchronized activity, and that the process of learning-induced dendritic spine reorganization, which is the structural basis associated with learning, was delayed. Dr. Yin further identified an important role for noradrenaline in the delayed motor learning in 16p11.2 deletion mice.  He revealed that the number of active noradrenaline neurons in a brain area called the locus coeruleus during motor learning was significantly reduced in 16p11.2 deletion mice. Remarkably, by increasing the activity of this neuron population using pharmacogenetic tools, he was able to rescue the elevated neuron synchrony, delayed spine reorganization, and motor learning. These results unveiled an unanticipated role of noradrenaline neuromodulation in improving the delayed motor learning in ASD model mice.

This paper significantly advances the field in both the methods for studying ASD and the cellular/circuits mechanisms underlying ASD. By imaging neuronal activity while mice were learning a specific motor task, he was able to visualize the activity of hundreds of neurons and linked the activity with learning behaviour. This led to identifying abnormalities in the brains of 16p11.2 deletion mice, which offers a unique perspective on the link between neuronal activity and spine reorganization that contribute to behavioral outcomes. Lastly, this study shows for the first time that noradrenaline modulation is crucial in regulating learning-related plasticity in the motor cortex in ASD.

In summary, these results uncover an important role of noradrenaline neurons in motor learning and provide a direction in developing therapeutic strategies for motor-related dysfunctions in ASD. Further exploration of different cell populations in the locus coeruleus using modern circuit dissection tools will enlighten the development of therapeutic strategies for counteracting neural circuit dysfunctions associated with ASD.

Dr. Xuming Yin performed this work as post-doctoral fellow in the laboratory of Dr. Simon Chen at the University of Ottawa. He combined head-fixed motor learning task with in vivo two-photon imaging experiments to visualize the activity of hundreds of neurons as mice were acquiring new motor movements. This allowed him to precisely analyze the relationship between behavior performance and neuronal activity during learning. He additionally employed pharmacogenetic tools and identified noradrenaline as a key player regulating the rate of motor learning in 16p11.2 deletion mice.  Dr. Yin conducted most of the experimental work and data analysis, prepared the figures, and wrote the manuscript. Dr. Simon Chen provided advice on experimental design, data analysis, and helped with editing the manuscript.