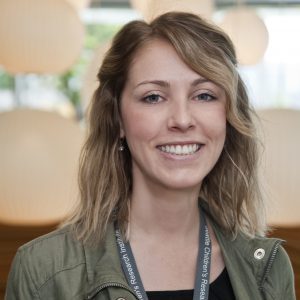 New research by post-doctoral fellow Dr. Jessica Megan Rosin and colleagues shows that specific immune cells in a brain region called the hypothalamus respond to maternal stress and influence nearby neural stem cells, but only in male mice. The male offspring of stressed mothers had a reduced number of oxytocin neurons in a specific region of the hypothalamus and their social behaviours were modified in adulthood, demonstrating the stress had long-lasting effects.

The hypothalamus is a powerful brain region that is responsive to external stressors and is essential for maintaining homeostatic processes, such as fluid-balance, body temperature, energy regulation, circadian rhythm, and reproduction. Less appreciated but equally important, the hypothalamus also influences emotional outputs, such as aggression and defensiveness, as well as social behaviors. Microglia are immune cells in the brain who survey their environment, respond to insults, and dispose of cellular debris. Microglia can also sense external inputs such as stress causing them to interact with neighbouring cells to control the local environment. The interplay between hypothalamic neurons and microglia as they both integrate stressors to regulate physiological homeostasis is of growing interest. In this study, post-doctoral fellow Jessica Megan Rosin and colleagues asked if microglia in the embryonic hypothalamus were stress responsive and, if so, whether their precocious activation perturbs nearby neural stem cell (NSC) programs.

These findings demonstrate microglia act as an underappreciated fetal brain sensor, responsible for recognizing adverse cues from the maternal environment and deciding whether to act as a buffer against the prenatal stressor or to inform neighbouring brain cells to adapt. This study provides key links between how perturbing the maternal environment impacts the developing brain, while also underscoring differences in responses between male and female embryos. This work is important since neurodevelopmental disorders such as autism spectrum disorder (ASD) and attention-deficit/hyperactivity disorders (ADHD) are more prominent in boys. Therefore, by further understanding microglial responses to maternal stressors, this study may help explain why this sex difference exists.

Dr. Jessica Rosin did this work as a post-doctoral fellow in the laboratory of Dr. Deborah Kurrasch, at the University of Calgary. When she joined Dr. Kurrasch’s lab she was interested in understanding how maternal stressors impact fetal brain development and whether these gestational perturbations had long term consequences on the behaviour of the offspring. Dr. Rosin conceptualized the project, designed and conducted all experiments and analyzed the majority of data, with help from Sarthak Sinha. Dr. Rosin wrote the manuscript together with Dr. Kurrasch, with input from the other co-authors.